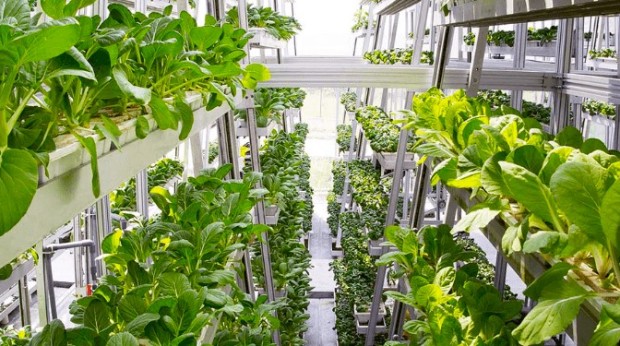 
Approximately 85% of the food consumed within the UAE is imported, and because oil prices and food prices have historically risen in tandem, rising food prices have been offset by simultaneous growth in oil revenue in the Gulf States. However, during the global food crisis of 2007-2008, typical grain exporters like Iran and India who suffered shortages, placed embargoes on rice and grain exports, making food from those sources inaccessible at any price.

In response, the UAE began buying swathes of farmland in countries with rich soil and climate such as Tanzania, Sudan, and Pakistan, and successfully avoided food shortages. However, new solutions need to be adopted to combat potential future food shortages.

One such example is Singapore’s Sky Greens, who won the ‘INDEX Award 2015’, for representing “the next generation of sustainable agriculture.” Sky Greens vertical farms can produce year-round vegetables, are climate resistant and require minimal resources.

Dubai Municipality expects the population of the UAE to double by 2030, and a larger population needs more secure sources of food.

Like Dubai, Singapore imports approximately 90% of its food, and projects such as Sky Greens are leading the way for the nation-state to become more food-independent. Like Singapore, Dubai’s landmass is limited and moreover, Dubai is hot and dry. By controlling the farming environment, and going vertically, Sky Green farms require much less land and resources to produce a relatively great amount of produce and are able to deliver produce within hours rather than days that imported food takes. Resulting in higher quality, fresher, more organic food, and healthier population too.